Speaking Their Language: Advocating for the Unhoused 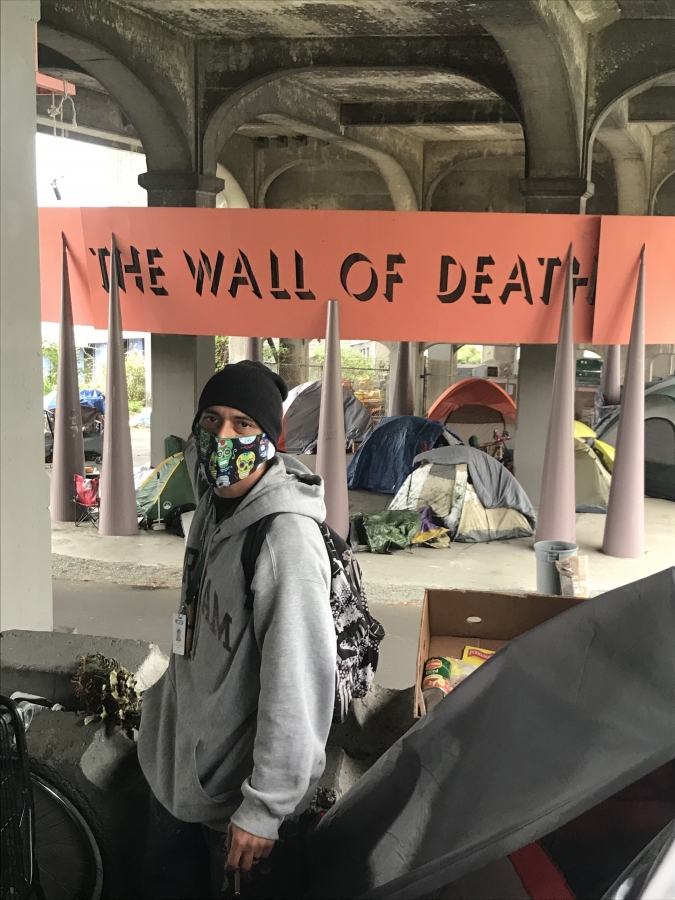 REACH team member David Delgado, recently spoke at the Real Change 27th Anniversary celebration. As the keynote speaker, Delgado relayed his experiences supporting unhoused people in Seattle’s University District (U District) and collaborating with local service providers, businesses, and U District Partnership staff. In Delgado’s new role for REACH, called Outreach System Coordinator North, he’ll continue to use his crisis background to improve outreach systems. We spoke with him about the themes of his keynote speech – and how we all can be better allies to those unhoused in our communities.

Why did you decide to speak at the Real Change event?

I’ve always had a good relationship with Real Change. In the past, I’ve worked with some of their advocates on policy issues. The conversation about me being the keynote speaker first came up after talking with one of their advocates, who asked me about the work that I’ve been doing. I shared with them that working in one particular neighborhood – University District – has changed the way I do outreach. As we got deeper into the conversation, I shared a whole bunch of ideas about improving emergency services, like creating an independent phone line for social workers that people can call instead of 911. Eventually, they asked me to speak at their event – and I agreed!

In your speech, you say that most of your calls aren’t real safety concerns but are incidents that make people uncomfortable. How do we train people to be better allies?

Yeah, that’s a good question. It’s hard for me to answer because before I took on this position, I also did a lot of activism and advocacy for the unhoused, even outside of my profession. Before working in my current role, I was fighting with the neighborhoods and business associates over the sweeps and other policies.

Since working with business owners, I’ve realized that most people just don’t know how to deal with a particular situation. And I respect that. There’s a good chunk of people who call me and say, “Look, I just don’t know,” or “I want this person to get a home, but this is the situation, what do I do?” When that happens, I give them advice and a little bit of education.

We need to create a space for people to have opportunities to become better allies. If a restaurant owner sees someone exhibiting interesting behaviors outside of their restaurant, they often don’t understand what’s happening. So, they can’t tell if something’s actually unsafe or not. That’s why I’m advocating for a public line for someone to call so that they can learn how to better respond and request a social or outreach worker if need be.

If people want to learn on their own, there are organizations like NAMI or Mental Health First Aid Training that they can use to educate themselves on de-escalation and mental health. I recognize that’s a lot to ask business owners and the public to do – which is why it’s better for the public to call up a professional that understands the issues that they’re dealing with.

You also called out a few businesses that are helping. What do those entities have in common?

Café Allegro Expresso Bar shared an alley with Roots Young Adult Shelter, Sound Mental Health and People’s Harm Reduction Alliance for many years. The coffee shop experienced homelessness at its core, but they don’t think negatively about the unhoused or someone with a substance use disorder. Instead of freaking out about someone using substances in the bathroom, they are doing what they can to keep people safe, like providing a container to dispose of sharp objects in the bathroom.

I’ve also witnessed the owner of Sweet Alchemy take trash bags to help an unhoused person clean up. That was her way of solving the problem, and I’ve seen her do this a few times. There are some property owners who have gotten angry at a person for having trash around them, but instead, Sweet Alchemy’s approach was, well, sweet.

Helping the unhoused, while also keeping neighborhoods safe and clean shouldn’t be at odds – but often it is. How can we fight this perception?

Neighborhoods want their area to be clean and safe. Advocates have to do a better job of relating how caring for the unhoused gets them there. Telling these great stories about how someone was homeless and then got into housing is less effective than saying “We will get this person off your street.”

Eventually, the business association agreed to a harm reduction tiny house village. It took me speaking their language. They needed to hear that people are using and come up with a plan to get them off the highway and out of the alleys. I spoke to what motivates them.

What action would you like people – and city officials – to take to help these social justice issues?

We all know housing is the solution, but we’re going to extremes. We have one group in the city that wants to sweep people away regardless of available places for those people to go, and another group, like myself, who doesn’t. I am against sweeps, but I’m not advocating for leaving people outside. We need an in-between plan, and that’s what I don’t hear anyone talking about. This is where social workers and the business association really needs to sit down and come up with a neighborhood plan. How can we make our neighborhoods cleaner and safer in a way that gives people dignity and respect?

However, you can’t come up with just one plan for the neighborhoods because the geographics and demographics are different. In the U District, my plan was to get that tiny house village open. I was going to refer everyone living on highways and within parks to live in the village. I knew that would work because I’ve spoken with those living outside in the U District. So, that would be an example of a neighborhood-specific plan. I wouldn’t advocate for the same thing in Ballard, for example, because the Ballard community has different needs.

My suggestion is for people, including city officials, to start working together and come up with a neighborhood plan. It’s going to take some time for the city to figure out housing, so what do we do in the meantime? There’s a way to work with people while they’re living outside.