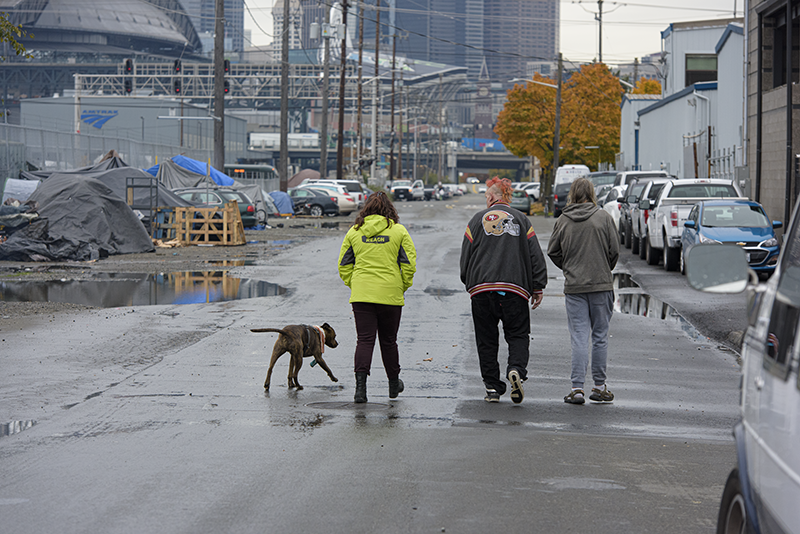 Becky Gilley does outreach with our unhoused community in the SODO neighborhood of Seattle.

Becky has been with the REACH program since 2016, she is currently an outreach care coordinator and has been partnered with the SODO BIA since February 2019. During a routine outreach visit to an encampment at the end of last year, she encountered a couple in their 30s who she hadn’t met before. Becky introduced herself and offered supplies – snacks, water, and other survival supplies. The couple—Tim and Stella—accepted the supplies, but declined further support. This was the first time they had met her, and who wants to tell their life story to a stranger? Becky carried on her way.

The next time Becky visited this encampment, she noticed the couples’ tent was much worse for wear, and that Stella didn’t have any winter clothes, despite it being the middle of November. From the outreach car, Becky was able to provide them with a new tent and some warm clothing donated from Metropolist’s coat drive a year prior. She offered these items, and Stella and Tim accepted.

Stella and Becky had a conversation about substance use, and right away Stella made it clear that she didn’t want to be using anymore. Right on the spot, Becky and Stella called the ETS clinic in SODO and made an intake appointment. It was a Wednesday and the appointment was scheduled for Monday, but Becky let Stella know that she could get a walk-in appointment any day of the week if she didn’t want to wait.

The next time Becky saw Stella and Tim—about two weeks later—she found out that Stella had gone to a walk-in appointment the very day after they had made the appointment, and that she had not missed a single day since then of treatment! This is a notoriously difficult time for patients, and Tim was so proud of Stella. Becky noticed from the beginning of her relationship with Stella and Tim how loving and supportive they were of each other—and how much they made each other laugh. It was clear that they were excited about a different future for themselves.

Over time, Tim has also stopped his substance use and has become more engaged and present. With consistent outreach visits to their encampment and regular presence at Northwest Harvest’s SODO Community Market—both people began to trust Becky’s support and they have been able to build a strong clinical relationship. Together they have navigated getting back on social security benefits, access food stamps, and get valid Washington State IDs. Becky also introduced Stella and Tim to another outreach worker, Tammy Green, who specializes in navigating the healthcare system.

Tim spoke a lot about his desire to find work and to build a better life for himself and Stella, but in SODO, showering and maintaining good hygiene is incredibly difficult. Even before the pandemic, access to public restrooms was limited and during, running water has been basically non-existent. When the Low Income Housing Institute opened the Executive Hotel to provide people with a safer location, Becky put Stella and Tim forward as candidates. They were accepted within the day.

The day after their first night at the enhance hotel shelter, Tim had an interview at the Pink Elephant Car Wash—an incredible organization that, unlike too many employers, hires people who are experiencing homelessness or have a history of criminal-legal system interaction. Showered, well-rested, and confident, Tim got the job and started work.

Tim worked his first day just as Stella’s social security back-pay came in. She was so excited and proud of him that she planned a surprise dinner at a local restaurant. They get to be just a couple, doing something special to celebrate their lives, and taking care of each other. “Our neighbors who are living outside want the same things anyone might want,” Becky said. “for the people they care about to be safe and healthy. To take care of each other, build community, and celebrate when good things happen. Everyone deserves this opportunity, and I’m grateful to have met these incredible people and to be a part of their journey. I hope they inspire you as much as they inspire me.”

*The clients’ names have been changed