A moment of clarity 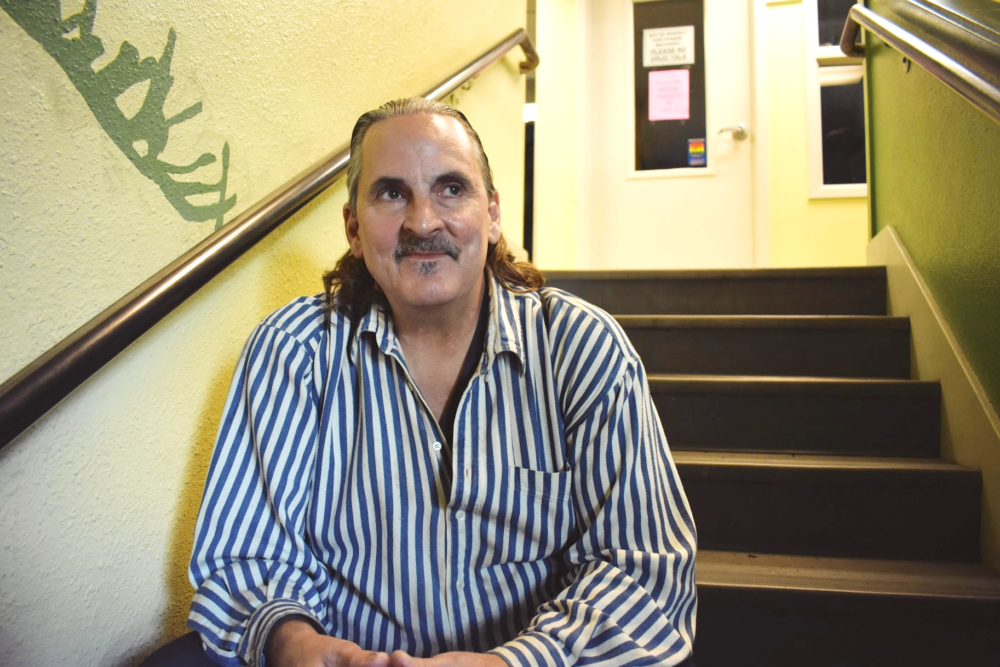 Born and raised in Seattle by a loving single mom, Joseph went from living in a large home with his family, to living in his car, and then a tent. Now, after five years of treatment and connection to services, he’s back in an apartment and looking forward to paying forward the life-changing help that he received.

“I was always an athlete. I was an athlete in junior high and college.” Growing up, he latched onto baseball and it became his passion. He played seriously, even trying out for the Cincinatti Red’s and playing a year for the Oregon Rockies—a single-A affiliate of the Colorado Rockies. While a professional career didn’t pan out, he continued on a number of competitive league teams as a pitcher well into his forties.

In 1999, while playing catch with friends in the off-season, he dove for a ball and landed on his shoulder, suffering a serious injury that required major rotator cuff surgery. For the long and painful recovery, Joseph was prescribed Oxycontin, Oxycodone, and Hydrocodone for two years by a doctor who was later charged with criminal over-prescription rates. “You’re getting these drugs from the doctor so you think it’s fine. If the doctor’s giving it to me, it must be okay.” At first, he took the medications to manage his pain, but chronic use led to opioid use disorder, starting his long battle with opioid addiction.

“I was very high-functioning—until I wasn’t.” Despite his addiction, he became a husband and father of three, continuing to work and play baseball. Faking injuries to get opioids became routine. Like so many people who struggle with addiction, his use wasn’t restricted to opioids. In 2007 he quit drinking and using cocaine—and has stayed clear of them since—but intensified his opioid use, starting to inject heroin intravenously. At this point, his wife started to notice. He stopped working, fell behind on bills, and he and his wife declared bankruptcy and filed for divorce.

By 2008, Joseph’s life took a precipitous fall from living at home with his wife and kids to homelessness and using intravenous heroin every day to stave off withdrawal. Along with facing the daily threat of withdrawal symptoms, he also faced insistent suicidal thoughts, believing that death was preferable to the way he was living. Only thoughts of his kids kept him from following through.

On Father’s Day 2013, his kids met him on the streets of Seattle sleeping on a bench. “My ex-wife brought all three of my kids to downtown Seattle and the found me on a park bench. Oh God, I cried. I was so upset. I felt like such a failure. But they still loved me.”

Later that year he overdosed twice, despite having been connected to housing services through Sound Mental Health and being treated for depression. These services, while they did not immediately result in seeking addiction treatment, brought stability into his life, but he still wasn’t ready to seek treatment for opioid use. Then in 2014, just before he came to ETS he overdosed the second time and his girlfriend had to call 911. The paramedics used Narcan to reverse the overdose, and on the way to the hospital he was revived again with a defibrillator.

The first thing he did after leaving the hospital was go to his dealer’s house to “get well” again. But this experience allowed him to see his life more clearly. He needed to find help. Through the King County needle exchange program with the support and enrollment of his then-girlfriend, Joseph learned about Evergreen Treatment Services (ETS) and went to the Seattle Clinic to get help.

He was always a leader and as a child of a single, working mother, he is resourceful. Despite being under the thumb of his addiction, these foundational traits stayed strong. Before starting recovery, he was always the one who went out to get drugs for himself, his roommates, and his girlfriend. Once he decided to stop using, they had no choice but to follow suit. He checked into ETS with his two roommates the same day.

The three of them still come to ETS, and when asked about his biggest supporter, his ex-roommate and now neighbor still comes to Joseph’s mind. They are lifelong friends and with the help of stable housing, are in recovery together.

He has been a part of the men’s group, a group therapy session that meets weekly at ETS. They keep each other accountable and can call each other out in a supportive environment. He values the access to medication-assisted treatment (MAT) along with group therapy, one-on-one counseling, and acupuncture, which he swears by.

While there have been times when Joseph has relapsed—addiction recovery is rarely a straight line of progress—now he is looking to take his compassion and love for helping others with him to his next goal. “I don’t want to waste my next twenty years like I wasted my last twenty years.” He is looking forward to volunteering with the local fire department on ride-alongs where he stays with overdose patients, comforting them in the hospital, and connecting them with the resources he knows can save lives. “I think that by helping other people it helps me.” He says that if telling his story and working with others convinces even just one person to get help at ETS, that it would all be worth it.